The Science of Laughter

Far from mere reactions to jokes, hoots and hollers are serious business: They're innate -- and important -- social tools.

Whether overheard in a crowded restaurant, punctuating the enthusiastic chatter of friends, or as the noisy guffaws on a TV laugh track, laughter is a fundamental part of everyday life. It is so common that we forget how strange -- and important -- it is. Indeed, laughter is a "speaking in tongues" in which we're moved not by religious fervor but by an unconscious response to social and linguistic cues. Stripped of its variation and nuance, laughter is a regular series of short vowel-like syllables usually transcribed as "ha-ha," "ho-ho" or "hee-hee." These syllables are part of the universal human vocabulary, produced and recognized by people of all cultures.

Given the universality of the sound, our ignorance about the purpose and meaning of laughter is remarkable. We somehow laugh at just the right times, without consciously knowing why we do it. Most people think of laughter as a simple response to comedy, or a cathartic mood-lifter. Instead, after 10 years of research on this little-studied topic, I concluded that laughter is primarily a social vocalization that binds people together. It is a hidden language that we all speak. It is not a learned group reaction but an instinctive behavior programmed by our genes. Laughter bonds us through humor and play.

Nothing to joke about

Despite its prominence in daily life, there is little research on how and why we laugh. I thought it was high time that we actually observed laughing people and described when they did it and what it meant. Research on laughter has led me out of my windowless laboratories into a more exciting social world of laughing gas, religious revivals, acting classes, tickle wars, baby chimpanzees and a search for the most ancient joke.

While we usually think of laughter as coming from an audience after a wisecrack from a single speaker, contrary to expectation, the speakers we observed laughed almost 50% more than their audiences. The study also showed that banal comments like, "Where have you been?" or "It was nice meeting you, too" -- hardly knee-slappers -- are far more likely to precede laughter than jokes. Only 10% to 20% of the laughter episodes we witnessed followed anything joke-like. Even the most humorous of the 1,200 comments that preceded laughter weren't necessarily howlers: "You don't have to drink, just buy us drinks!" and "Was that before or after I took my clothes off?." being two of my favorites. This suggests that the critical stimulus for laughter is another person, not a joke.

Students in my classes confirmed the social nature of laughter by recording the circumstances of their laughter in diaries. After excluding the vicarious social effects of media (television, radio, books, etc.), its social nature was striking: Laughter was 30 times more frequent in social than solitary situations. The students were much more likely to talk to themselves or even smile when alone than to laugh. However happy we may feel, laughter is a signal we send to others and it virtually disappears when we lack an audience.

Laughter is also extremely difficult to control consciously. Try asking a friend to laugh, for example. Most will announce, "I can't laugh on command," or some similar statement. Your friends' observations are accurate -- their efforts to laugh on command will be forced or futile. It will take them many seconds to produce a laugh, if they can do it at all. This suggests that we cannot deliberately activate the brain's mechanisms for affective expression. Playfulness, being in a group, and positive emotional tone mark the social settings of most laughs.

Linguist Deborah Tannen described gender differences in speech in her best-selling book, You Just Don't Understand (Ballantine, 1991). The gender differences in laughter may be even greater. In our 1,200 case studies, my fellow researchers and I found that while both sexes laugh a lot, females laugh more. In cross-gender conversations, females laughed 126% more than their male counterparts, meaning that women tend to do the most laughing while males tend to do the most laugh-getting. Men seem to be the main instigators of humor across cultures, which begins in early childhood. Think back to your high school class clown -- most likely he was a male. The gender pattern of everyday laughter also suggests why there are more male than female comedians. (Rodney Dangerfield likely gets more respect than he claims.)

Given the differences in male and female laugh patterns, is laughter a factor in meeting, matching and mating? I sought an answer in the human marketplace of newspaper personal ads. In 3,745 ads placed on April 28, 1996 in eight papers from the Baltimore Sun to the San Diego Union-Tribune, females were 62% more likely to mention laughter in their ads, and women were more likely to seek out a "sense of humor" while men were more likely to offer it. Clearly, women seek men who make them laugh, and men are eager to comply with this request. When Karl Grammar and Irenaus Eibl-Eibesfeldt studied spontaneous conversations between mixed-sex pairs of young German adults meeting for the first time, they noted that the more a woman laughed aloud during these encounters, the greater her self-reported interest in the man she was talking to. In the same vein, men were more interested in women who laughed heartily in their presence. The personal ads and the German study complement an observation from my field studies: The laughter of the female, not the male, is the critical index of a healthy relationship. Guys can laugh or not, but what matters is that women get their yuks in.

In many societies world wide -- ranging from the Tamil of Southern India to the Tzeltal of Mexico -- laughter is self-effacing behavior, and the women in my study may have used it as an unconscious vocal display of compliance or solidarity with a more socially dominant group member. I suspect, however, that the gender patterns of laughter are fluid and shift subconsciously with social circumstance. For example, the workplace giggles of a young female executive will probably diminish as she ascends the corporate ladder, but she will remain a barrel of laughs when cavorting with old chums. Consider your own workplace. Have you ever encountered a strong leader with a giggle? Someone who laughs a lot, and unconditionally, may be a good team player, but they'll seldom be a president.

As anyone who has ever laughed at the sight of someone doubled over can attest, laughter is contagious. Since our laughter is under minimal conscious control, it is spontaneous and relatively uncensored. Contagious laughter is a compelling display of Homo sapiens, a social mammal. It strips away our veneer of culture and challenges the hypothesis that we are in full control of our behavior. From these synchronized vocal outbursts come insights into the neurological roots of human social behavior and speech.

Consider the extraordinary 1962 outbreak of contagious laughter in a girls' boarding school in Tanzania. The first symptoms appeared on January 30, when three girls got the giggles and couldn't stop laughing. The symptoms quickly spread to 95 students, forcing the school to close on March 18. The girls sent home from the school were vectors for the further spread of the epidemic. Related outbreaks occurred in other schools in Central Africa and spread like wildfire, ceasing two-and-a-half years later and afflicting nearly 1,000 people.

Before dismissing the African outbreak as an anomaly, consider our own technologically triggered mini-epidemics produced by television laugh tracks. Laugh tracks have accompanied most television sitcoms since September 9, 1950. At 7:00 that evening, "The Hank McCune Show" used the first laugh track to compensate for being filmed without a live audience. The rest is history. Canned laughter may sound artificial, but it makes TV viewers laugh as if they were part of a live theater audience.

The irresistibility of others' laughter has its roots in the neurological mechanism of laugh detection. The fact that laughter is contagious raises the intriguing possibility that humans have an auditory laugh detector -- a neural circuit in the brain that responds exclusively to laughter. (Contagious yawning may involve a similar process in the visual domain.) Once triggered, the laugh detector activates a laugh generator, a neural circuit that causes us in turn to produce laughter.

Furthermore, laughter is not randomly scattered through speech. A speaker may say "You are going where?...ha-ha," but rarely, "You are going...ha-ha...where?" This is evidence of "the punctuation effect" -- the tendency to laugh almost exclusively at phrase breaks in speech. This pattern requires that speech has priority over laughter.

The occurrence of speaker laughter at the end of phrases suggests that a neurologically based process governs the placement of laughter in speech, and that different brain regions are involved in the expression of cognitively oriented speech and the more emotion-laden vocalization of laughter. During conversation, speech trumps -- that is, it inhibits -- laughter.

Authorities from the Bible to Reader's Digest remind us that "laughter is the best medicine." Print and broadcast reporters produce upbeat, often frothy stories like "A Laugh a Day Keeps the Doctor Away." A best-selling Norman Cousins book and a popular Robin Williams film Patch Adams amplified this message. But left unsaid in such reports is a jarring truth: Laughter did not evolve to make us feel good or improve our health. Certainly, laughter unites people, and social support has been shown in studies to improve mental and physical health. Indeed, the presumed health benefits of laughter may be coincidental consequences of its primary goal: bringing people together.

Laughter is an energetic activity that raises our heart rate and blood pressure, but these physiological effects are incompletely documented and their medicinal benefits are even less certain. Lennart Levi, of the Karolinska Institute in Stockholm, reported that comedy activates the body's "fight or flight" system, increasing catecholamine levels in urine, a measure of activation and stress. Lee Berk, DHSc, of the Loma Linda School of Medicine, countered with a widely cited study that reported that laughter reduced catecholamines and other hormonal measures of sympathetic activation. This reduction in stress and associated hormones is the mechanism through which laughter is presumed to enhance immune function. Unfortunately, Berk's studies show at best a biological response to comedy. His reports included only five experimental subjects, never stated whether those subjects actually laughed, and were presented in only three brief abstracts.

Does a sense of humor or a lighthearted personality add years to your life? Not necessarily. A large-scale study by Howard Friedman, Ph.D., professor of psychology at the University of California at Riverside, found optimism and sense of humor in childhood to be inversely related to longevity. This may be because people with untempered optimism indulge in risk-taking, thinking, "I'll be okay."

Pain reduction is one of laughter's promising applications. Rosemary Cogan, Ph.D., a professor of psychology at Texas Tech University, found that subjects who laughed at a Lily Tomlin video or underwent a relaxation procedure tolerated more discomfort than other subjects. Humor may help temper intense pain. James Rotton, Ph.D., of Florida International University, reported that orthopedic surgery patients who watched comedic videos requested fewer aspirin and tranquilizers than the group that viewed dramas. Humor may also help us cope with stress. In a study by Michelle Newman, Ph.D., an assistant professor of psychology at Penn State University, subjects viewed a film about three grisly accidents and had to narrate it either in a humorous or serious style. Those who used the humorous tone had the lowest negative affect and tension.

Rigorous proof that we can reduce stress and pain through laughter remains an unrealized but reasonable prospect. While we wait for definitive evidence, it can't hurt -- and it's certainly enjoyable -- to laugh. So, a guy walks into a bar...

More From This Issue 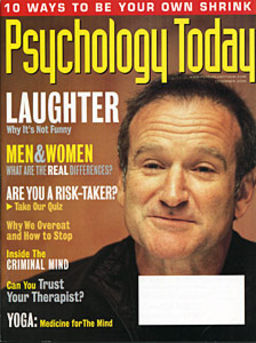 The Science of Laughter